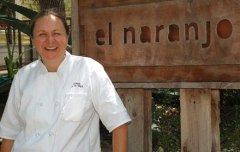 In May of 2006, school teachers in Oaxaca City staged a protest to demand higher wages.  What was originally a peaceful demonstration soon turned into a 6 month nightmare for businesses, tourism and the many people who made their living in the service industry of this United National World Heritage City.

One of the businesses that was lost that year was a small restaurant named El Naranjo. Located in the city center, El Naranjo owner and Chef Iliana de la Vega had a great reputation.  The restaurant was a regular stop for foodies and locals alike but was unable to survive a protest that effectively shut down an entire city.

I know, because I was there, negotiating with pipe wielding protestors and the folks that were burning busses for the right to walk in the city.

And recently I was there in Austin, Texas at the newest incarnation of El Naranjo, again headed up by Chef Iliana de la Vega.

We arrived midday on a Sunday to the Rainey Street location.  To give you an idea of what this street is like, think New Orleans. Converted houses serving as restaurants, clubs, bars and music venues.  Some pretty run down and others restored monuments to the growing gastronomic culture that is Austin. 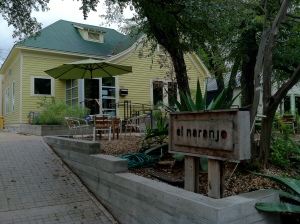 El Naranjo says anything but Mexico from the outside.  Gone are the vibrant colors many expect when they head to their favorite Mexican restaurant.  In their place is a soft yellow with white trim.

You enter the small restaurant into what must have once been the living room, but now serves as the bar. Sleek and minimal, the muted walls throughout the restaurant are adorned with mostly black and white photos of Oaxaca, serving as a reminder of that great city.

When you are in the bar and looking at the wall of libations, you figure out pretty quickly that El Naranjo is not your typical Mexican restaurant.  That’s because in addition to the standard tequila offerings, there is also a well stocked selection of mezcals, which you can order neat, or in a cocktail.  As mezcal grows in popularity, it is nice to see a growing number of chefs and restauranteurs like Iliana making sure their customers can try this wonderful spirit.

We were seated quickly in what was a probably a converted bedroom in this old house. After being greeted quickly and warmly by the wait staff, we were brought two menus. One for brunch and the other for spirits and wines.  I was impressed by the number of top end spirits but wondered about the lack of wine from the Mexican Valle de Guadalupe in Baja California.  It was just something that caught my attention.

I ordered our table a guacamole appetizer to stall for time as we looked over the brunch menu.  The guac was fantastic, rich and chunky, nothing was lacking.  Served alongside fresh made and fried tortillas, it reminded me of some of the best  I’ve had in Mexico.

To eat, I went for the chiliquiles.  Let’s face it, I could eat chiliquiles every Sunday morning so I was not passing these up.  Normally I like mine in the classic green sauce, but our waitress could see I was hesitant to pass up a red guajillo chile sauce, so she offered to split my plate.  Once I added the chicken and egg, I was all set for a great breakfast.

The rest of the group tried out the quesadillas with rajas de poblano chiles, braised ribs in chile morita from Oaxaca, and tacos dorados.

As our group ate,  I just enjoyed life.  Traveling extensively in Mexico, I recognize the traditional tastes of that great country.  Few things give me more joy that seeing others enjoy, even if only for a short time, what I experience on a regular basis, the traditional flavors of Mexico.

Everyone in our group was incredibly happy with the food, starting with the appetizer and ending with a great chocolate cake, home made mamey and Earl Grey ice cream, an incredible flan and of course, café de olla.

Should you go?  Of course!  But when you do, understand that El Naranjo is different from what most of America sees as a Mexican Restaurant.  You won’t be finding any yellow cheese or combo plates here.  It is also a tad more expensive, but well worth it.

El Naranjo is the place where the traditional flavors of Mexico are the star.  The miles that separate me from My Mexico seemed to melt away in Chef Iliana’s and her husband Ernesto’s wonderful restaurant.  From the look, to the bar offerings, to the food and even the table side visit from Chef Iliana herself, I felt at home, just as you will to if you choose to visit.

[some photos from The Scrumptious Chef and Chef Gwen Ashley Walters… follow the links, give ’em some love and get their take on El Naranjo]