Dining with Dave… 2014 Taste of Mexico 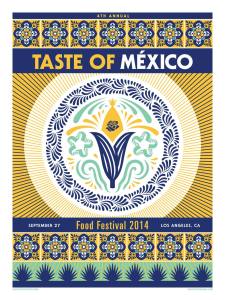 In 2010 I was invited to attend a new event to be held at St. Vibiana’s Cathedral in central Los Angeles.

A group of chefs from some of the city’s best Mexican Restaurants had gotten together to celebrate and highlight the authentic flavors and culture of Mexico. La Casita Mexicana, Guelaguetza Restaurante, Frida Mexican Cuisine and La Monarca Bakery were the anchors and hosts of the first Taste of Mexico. It was a fantastic success, garnering praise from both the people and press that jammed the intimate setting that night.

Some of the Chefs of the 2014 Taste of Mexico

Fast forward to 2014 and what a change a few years can make.

Now occupying LA Plaza, the outdoor birthplace of Los Angeles, the Taste of Mexico has grown into one of the premier food events in the city. Sporting more than 30 additional restaurants and vendors of everything from cookies and paletas to airline tickets, the Taste has become the goto event for lovers of Mexican food and culture.

This year instead of just having a evening session, and perhaps responding to growing demand, the leaders decided to add an afternoon session with a picnic/tianguis feel.

Taking up a smaller space than the evening events at La Plaza and primarily offering tacos, snacks and drinks, the afternoon was a clear winner. People brought their kids, listened and danced to music and celebrated together all things Mexican on a day that was unseasonably mild for Southern California.

But for many, the evening event was where it was at. Think of it as a Mexican food buffet on steroids. With live entertainment. With beer. With tequila. With mezcal. With food from almost every corner of our great neighbors to the south.

Direct from the State of Hidalgo, the team from Canirac Hidalgo

Birria from Jalisco? Check. Pastes from Hidalgo? Check. Mole from Oaxaca… and Puebla? Of course. Seafood from Sinaloa and the coastal states? You bet. Cochinita Pibil from the Yucatan? You know it, and much much more, including almost every type of taco imaginable. The Taste has become the sample platter to beat all sample platters.

If you want to experience the breadth and variety of Mexican cuisine, and begin making your Mexican food bucket list, I cannot imagine a better venue. And you’ll have the added benefit of being able to talk directly to some of the best chefs in Los Angeles.

It’s a huge change from the first Taste of Mexico back in 2010. The event has grown exponentially both in terms of attendance and restauranteurs who want to take part. No longer is it an intimate night for a small handful of the culinary elite of Los Angeles. It is now an event that has been adopted by the masses, all in celebration of the wonderful cuisine of Mexico.

Here’s a side note… this years event sold out. If you are interested in going next year, purchase your tickets early… as we say in Spanish, “Vale la pena!”

For another take on the Taste, check out our friends at the MultiCultural Cooking Network.