I was recently in Carson City, NV for a couple of days and decided to check out one of best reviewed local Mexican restaurants, the San Marcos Grill. In 2014, it was named Favorite Mexican Restaurant by Nevada Appeal, one of the local newspapers in Northern Nevada.

Housed in a strip mall, when you drive up, the impression is somewhat lacking. With the big Corona and Modelo Beer signs in the windows, you might be tempted to get back in the car and look for a national outlet.

Resist that urge, because what you will find inside is simply put, something different.

This is not some chain restaurant trying to fake you into believing they care about you. The folks at San Marcos Grill, a family run restaurant, really want you to enjoy the place, the staff and most importantly, the food. 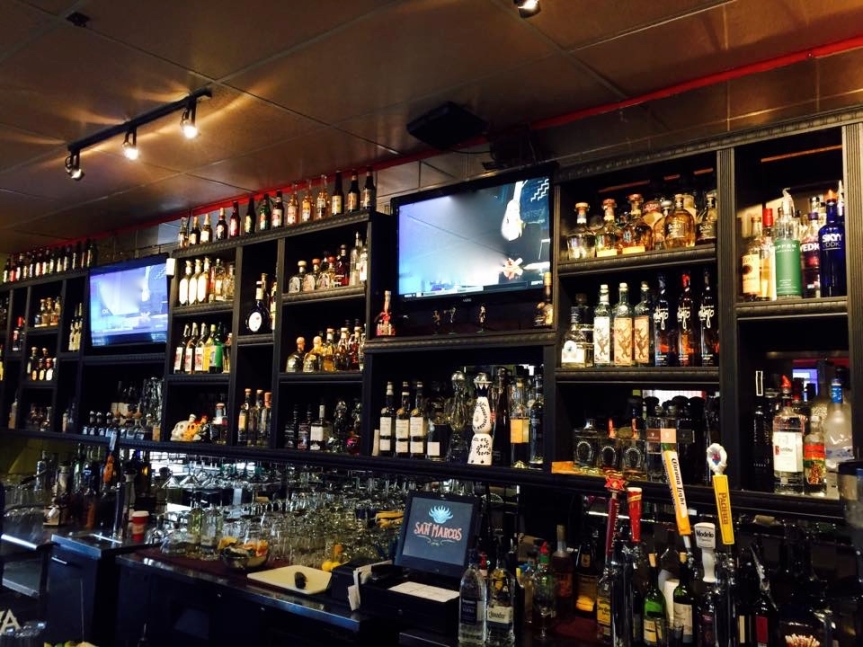 Leaving the parking lot behind, when you open the door your first impression is of the immense bar. Literally, it dominates its space, and I soon found out why that’s a good thing.

When I walked in, I was quickly greeted and given a table. As it was Cinco de Mayo weekend, there was live music and in the back area, a party going on. Soon I was brought a menu, chips, salsa and a bean dip, adorned with quest fresco.

San Marcos has a reputation of having a pretty good selection of tequila. But if you know me, you know my first choice will always be mezcal. I checked the menu, saw that they at least had four selections and asked my server for one of them.

A few of the tequilas offered at San Marcos Grill

Then something amazing happened.

The owner came over and asked if I was the guy looking for mezcal. I said yes and he apologized, saying they were unable to import the particular mezcal I wanted any longer. I asked if they had anything else, because the remainder of the menu offerings were pretty tame. Quickly he said they had another 10 or 11 mezcals and invited me to the bar to check them out.

That is service and that is customer care, something increasingly rare in restaurants today.

I ordered a shot of Mezcal Leyenda from Guerrero and decided it was time for my dinner order. The waitress said the chile verde was really good, so I went with that, but with a twist. Lots of folks online rave about the mole here, so I asked her to bring me a sample of the sauce. I wanted to taste it with my meal. I also ordered a simple carne asada taco, the classic in Mexico. 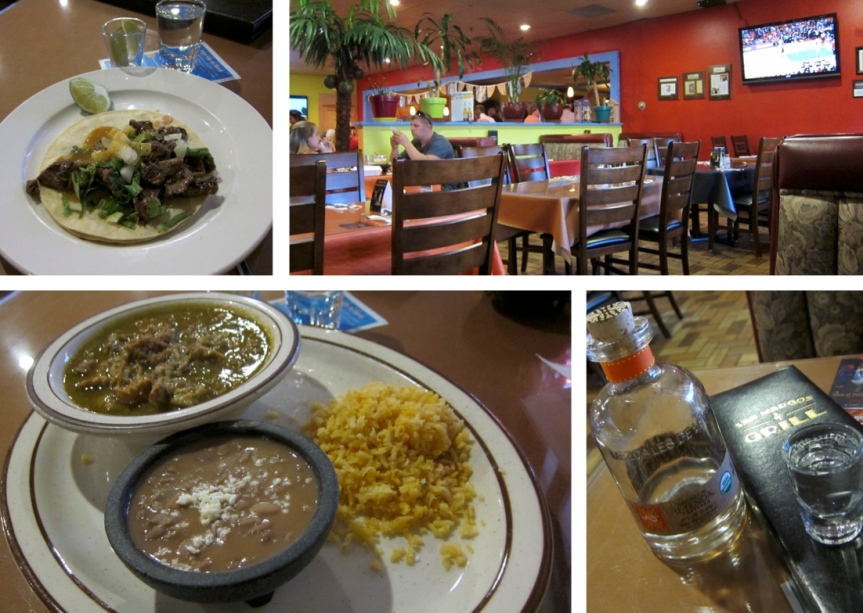 The mezcal was wonderful. At 40% alcohol content, it was a fresh and vibrant with a little spice. The over 1 minute finish was both strong and smoky. Made by Jose Cienfuegos as part of an agave cooperate, I’d love to have this mezcal in my personal collection.

By the time my meal arrived, I was ready to eat. Nothing builds an appetite like a long days ride across the Nevada desert. I started with my taco. If there was a weak point of the night, this was it. It was loaded with meat, had the double tortilla, but there was a strong taste of Worcestershire sauce. I know every Mexican kitchen has a bottle of this on the shelf, I’ve just never thought carne asada was where you should use it.

My chile verde was fantastic. Usually this gets served on a plate in most places. I appreciated the bowl as it literally tells you this is a stew. It was a darkish green color, from the tomatillos, with a rich meaty taste, courtesy of the tender pork that was in every bite.

The mole sauce I tried also caught my attention. Spending time in Oaxaca and being a regular at Guelaguetza Restaurant in Los Angeles, I know what I like in mole. This was pretty good mole poblano, better known as mole, Puebla style. Rich in color, spicy with an earthy taste, I would get this in the future and recommend you try it.

All through my meal, various people came by to make sure everything was alright and I watched them do the same throughout the dining room. That attention to the people in your restaurant is always a good sign.

If I was to make a suggestion, this would be it. Since you are served beans with your chips, you don’t need another bowl of the same with your meal. For the chile verde, I’d skip those beans and add white rice, a better accompaniment than the red, tomato based rice.

But that is a small suggestion.

San Marcos Grill is a great example of what a family can do to build a nice business. Working together, I’m guessing the menu they have is largely based on the food their abuela made for all of them over the years. Then, with a few adjustments for the gringo palate, they were all set.

Should you go? Of course!

You can get the number 7 combo plate all over town, but San Marcos Grill offers something a little different. Is it perfect? Not at all, but no restaurant ever is. My dinner was solid, the service great, the staff friendly and they had a good variety of mezcal.