Tomatoes, Strawberries and Despair… All a Product of Agribusiness in Mexico

Tons and tons of tomatoes ready for transport to the US after being harvested by Mexican Farm Workers. Photo from the Los Angeles Times.

Recently the federal government of Mexico made an agreement with farm labor activists in the San Quintín Valley of Baja California Norte to subsidize their daily income. After a series of labor stoppages and blockades of Mexican Highway 1 in this area south of Ensenada, the feds entered into what essentially was a stop gap measure to get produce once again rolling north towards el otro lado, or as you may know it, the United States.

Here’s the back story.

First, we must start with the official minimum wage in Mexico. For 2015, the daily rate is 70 pesos. Based on current exchange rates, that works out to about $4.75 a day. Just to be clear, that is not an hourly rate, it is a daily rate.

Commercial greenhouses in Sinaloa loaded with tomatoes that eventually will find their way to the US. Photo from the Los Angeles Times.

Now, to be sure, few people are actually paid that amount. It’s more of a base number for negotiation. For instance, the laborers in Baja California that pick and harvest fruit and vegetables for the American table get almost double that, 135 pesos, or $10.00 US.

That’s the wage side. Living is another story. I’ve traveled to this area, and also the agricultural region of Sinaloa for years and have spent significant time living with people who have worked in agribusiness in these areas. Not the jefes mind you, but the folks making the 10 bucks a day.

Their day starts about 4:30 in the morning when the busses to the fields rumble down the dirt roads of that area. Men, women, children and sometimes entire families wait at street corners for a ride to a days work. They’ll be dropped off at the same corner at the end of the day, about 12 hours later.

The work is brutal. Imagine spending an entire day bent over picking fruit, only getting an occasional break. And having to work as fast as possible so you made sure you got invited back the next day.

Once your bins of cucumbers, strawberries or tomatoes are full, you then have to carry them to a collection area, and start all over again. Hour after hour, until quitting time. 5½ days a week.

Driving down the Baja peninsula, this is what you’ll see entering many of the towns where thousands of migrant farm workers live. This is the entrance to Camalú.

All for your 135 pesos a day. A salary that has essentially remained unchanged for years, even as inflation ate away the value of each and every one of those pesos. This year, the workers, many of them migrants from other parts of Mexico, including Oaxaca, said “Ya, Basta!” Enough already!

It was time to ask demand a raise. Many had tired of the back breaking work and the low pay, so in March, they started striking. The resulting work slowdown and the media got the growers attention and they initially offered a raise of 6%, or about 8 pesos a day. That’s less than 60 cents. After that was rejected, the growers offered to increase their offer to 8%, or about 70 cents a day.

When that failed to satisfy the workers, who originally wanted a raise to $20.00 a day, the federal government, fearful of a supply line disruption to such US stores as Wal-Mart, Costco and Safeway/Vons decided to step in.

At that point, the Feds did what was necessary to get the workers back to work as soon as possible. If the harvest was left to rot on the vine, the damage to the Mexican agribusiness interests might have been catastrophic. So somehow, the Feds decided they would subsidize the income of the workers, since the growers were not going to do so.

They settled on a wage of 200 pesos a day, with the Feds picking up the difference between what the growers were willing to pay, about 145 pesos a day. This means the government of Mexico is directly paying the workers in the agricultural belt of San Quintín about 55 pesos a day.

Recently I was in Oaxaca. Some of my friends there, knowing that I have a long history in that area of Baja California asked me about the subsidies and the work. They listened as I described the brutal working conditions and the “dorms” recent migrants live in until they can save enough lana, or cash to build a ramshackle home.

Literally, Downtown Camalú, Baja California, Mexico. This is how many of the northern Baja towns along Highway 1 look after you leave the main road.

As a California native, I grew up seeing and hearing about the conditions faced by migrant farmworkers. Nothing prepared me for what I saw in some of the towns around San Quintín. One particular town, Camalú, had a building that was about 45 meters by 12 meters, lined with lice and pest infested beds. For privacy, families had hung sheets, to resemble makeshift rooms.

Migrant workers camp in Sinaloa, light years better than what you’ll find in some areas of baja California. Photo from the Los Angeles Times

The bathroom for the entire camp was a mold and algae ridden 300 square foot facility that frankly, you tried to avoid at all costs. it was simply scary. At high season, hundreds of workers and their families would live there.

When we finally got to the new salary the workers would receive the question that came up was how, and under what authority, was the federal government paying these subsidies. And why just in that region? How was it a wage of 200 pesos was fair in Baja California, but not in the agricultural areas of Sinaloa, or the coffee fields of Oaxaca.

These are the very questions many are putting to the federal government right now. I am not sure how President Enrique Peña Nieto is going to respond. But this much I do know, based on what I am paying for those strawberries and tomatoes, and the conditions the workers must endure to get those fruit and vegetables to our tables here in America, even 200 pesos a day is a woefully inadequate salary. 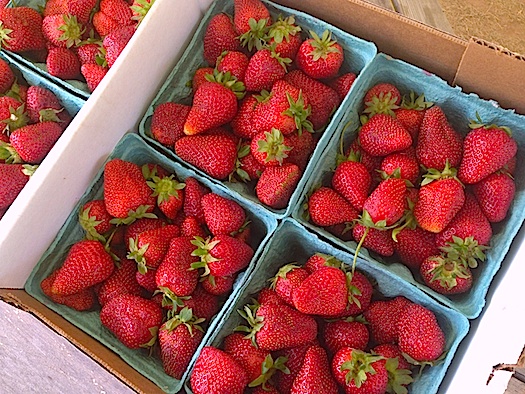 A flat of strawberries in the US costs about $20.00 a flat… more than the person picking those berries makes in an entire day.

The cost of a flat of strawberries from Mexico at Costco and other US stores is almost $20.00, or approximately 288 Mexican pesos. That’s almost 50% above what the person that picks those strawberries makes for an entire day of work.

I understand that the growers have a right to make a buck, or even two. But for them to make absurd profits at the expense of their workers, who only want a fair wage for a days work, seems unjust to me.

Where’s Cesar Chavez when we need him in Mexico?

Want to read more? The Los Angeles Times has recently done some great reporting on all of this in their Product of Mexico series. Below are a few selected articles from that series.