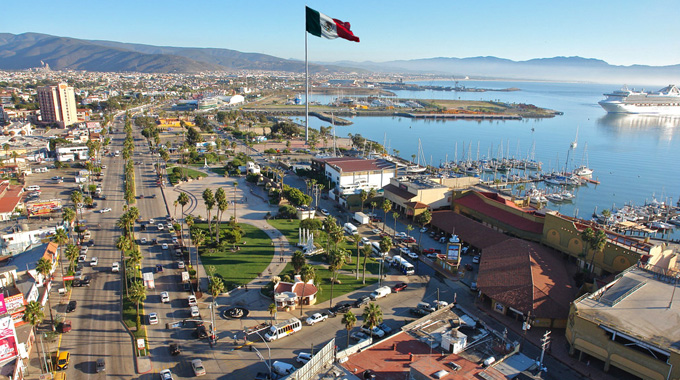 The heart of the tourist area in Ensenada, Mexico, Baja California Norte

A recent article on water and Baja California included this choice morsel… “Ensenada, the only municipality in Baja California that does not receive water from the [Colorado] river, has been subject to rationing measures since 2014.”

That statement caught my eye because it used the term “rationing measures.”

I’ve lived and worked in the Ensenada area for almost 25 years. I’ve seen the area when it is incredibly green, and when it more closely resembles a dust bowl, as it does now. No doubt Ensenada has a water problem, but to say they are using rationing measures to curtail water use is to fundamentally misunderstand what that means.

There are two types of water users in Ensenada and the rest of Mexico. Those with cisterns, and those without. If a family has a cistern, it has the ability to weather a water cut off, shortage, or an unexpected disruption in service, a common feature here in Mexico, no matter where you live.

Here’s why that’s important. Frequently, in an effort to save water, the Ensenada municipality, which starts in La Misión on the north and stretches south to the border of Baja California Sur, just decides to turn the spigot off for a day. Or two, or three. These service disruptions are what qualify as “rationing measures” here in the Ensenada area.

By turning off the water authorities believe less water will be used. And in some ways that’s true. But only from some people, the people without cisterns. Those are the folks who are usually found at the lower rung of the economic ladder.

If a family has money, when they build their house, they will make sure there is a cistern there. Think of it like a gigantic bathtub storage system. A typical cistern will hold upwards of 10,000 gallons of water. And when it gets below a certain level, that cistern, connected to the city water source, will automatically refill.

So when the city shuts off the water for a day, it’s not an issue for a family with a cistern. When that water service is restored, the water the family used from their cistern is 100% replaced and they are ready for the  next round of “rationing measures.” Effectively, they have avoided any cuts in their water usage.

Now the family without a cistern is in another boat completely. This is the family that pays the cost of water rationing. Without a cistern, they are forced to endure long hours, and sometimes days of no water. No water for washing clothes, no water for bathing, either yourself or your young children and no water for flushing the toilet.

Understand what I am saying… not just reduced water. Not a higher cost for water. No water. Trust me on this, it ain’t fun. I’ve come home covered in dirt and concrete in Ensenada, dying for a shower, and there has been no water. I can’t imagine how a mother taking care of her kids deals with it. But that’s life for a significant portion of the population here in Mexico.

For years I worked among the migrant populations of the San Quintín Valley. Water was rationed there too. But differently. You see in this area, agriculture is king. That means no one got any water until the Big Ag folks said okay. Sometimes we just left the tap open with a hose attached that led to a 55 gallon drum where we collected whatever water someone decided should be allocated to us. There were times when in a week, we collected a grand total of about 25 gallons of water.

Now don’t get me wrong, I know water is an issue here in Mexico. Like a lot of people in the US, Mexicans forget how valuable a resource water is, especially when it freely runs from a faucet. I’m a 100% supporter of water rationing if it is needed.

I am also a big fan of fairness, and education. The Mexican people are smart people. If their leaders would have an honest conversation with them, explain where they are in the water issues gripping the entire western part of the continent, they’ll make the necessary changes. But, and this will be huge, regular everyday folks have got to believe everyone will be sacrificing, from the politicians to the folks with cisterns to the Big Ag folks all the way down the line.

If you want people to support your government and the programs they propose, like water rationing, you’ve got to make sure the sacrifice is shared by all, not just those at the lower end of the economic rung.

I often wonder if the Mexican government gets this or if they even realize the effects of their policies on a majority of the people in their country.