Dining with Dave… The Happy Fish in Guadalajara 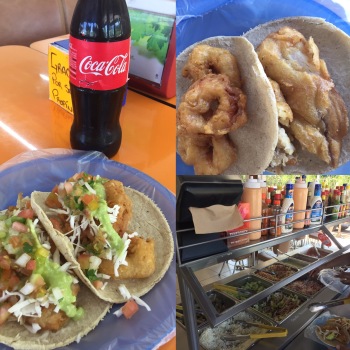 Lunch at The Happy Fish in Guadalajara

I’ve had groups of people eating these delicious entrees with me in Ensenada for years. It’s just a given that if you visit Ensenada, you’re gonna want to visit the area around the Mercado Negro and get a plate of fish tacos.

Years ago I arrived in Guadalajara and was in a taxi when the driver asked me if I had visited other places in Mexico. When I told him I had and where I’d been, he wanted to take me to a place that had “Ensenada” style fish tacos. Turning him down, I explained that I was a big fan of the original and didn’t need to try a probably lousy copy.

But that doesn’t mean I can’t enjoy other types of fish tacos. So that’s what I did recently.

I was in a bus on Avenida Tepeyac, again in Guadalajara, when I saw a place named The Happy Fish out the window. Looking them up online, I saw they are among the best reviewed places in Guadalajara for fish tacos. That was certainly good enough for me to give them a try.

As I walked up to the counter at The Happy Fish I saw kilos of fish and shrimp ready to be made into tacos. I ordered two fish tacos for my friend, and for me, one fish and one shrimp. I also added a marlin empanada. Once we had our plates, we went over to the condiment bar to load up our offerings and then took a seat in the big dining area. While we chose a table, you could also opt for a more traditional “bar” experience behind the cook station.

So here are my first thoughts.

We got there about 2:00. They are open from 8:00 – 4:00. I am guessing they cook most of their fish up early and that’s it. In any event, you never actually see the fish being cooked. Both the fish and the shrimp we were served were cold and by the time I got my tacos all dressed up and ready to go, even the tortillas were ice cold.

The fish taco was pretty mushy, probably from sitting. They use dogfish, abundant off the coast of Manzanillo. The breading [La Paz or Southern Baja Style] was certainly not the tempura style I’ve come to expect. A little bland, it was more like what you’d get if you had fried the fish at your home. The pieces where huge though and had a good taste.

For me, the shrimp was the star. Even cold I could tell that when it was hot, it would be good. Lightly battered, it’s simply a winner. And they give you a ton.

The marlin empanada was interesting. It’s basically a fish “hot pocket” although again, it was cold. The marlin inside is shredded and mixed with tomato, garlic and onion. Tasting good, with a light fluffy crust reminiscent of a flaky pot pie crust, I again wondered how it would have been hot. They also offer a tuna empanada.

Let me add that my friend from Guadalajara thanked me for taking him and said he now had another place he could bring his wife.

Would I recommend The Happy Fish? Maybe, but I would ask them for something just cooked. Do not settle for the cold stuff. You’re paying your hard earned pesos so you just shouldn’t.

And you should get the shrimp… along with your soda, served in an ice cold glass bottle.

The Happy Fish, 4709 Avenida Tepeyac, Guadalajara… in front of UNIVA